Moving Into Industry 4.0, The Era of Smart Factory Automation

Smart Factories: The Wave of the Future

Smart factories are the wave of the future.

Smart factories will be intelligent and automated factories, where machines are networked with each other, able to diagnose and solve problems by collecting and analyzing big data in real-time.

Production will become more seamless, from planning all the way to actual operations.

Most of all, robotic machinery handling collaborative roles in production will become smaller, more mobile, more easily programmable. They will learn and become artificially intelligent; they will become smarter, more autonomous, and able to self-optimize. Predictive maintenance will become the norm.

Smart factories are the logical, intended outcome of Industry 4.0. Smart factory automation will be driven by artificial intelligence, altering industrial production in ways we’ve never seen before, aided by new technologies that are now at our disposal.

The best way to answer this question is to look back at the history of manufacturing.

The Third Industrial Revolution improved on the limitations of analog and electrical machinery by introducing computer automation. By the late 1970s, most production line machinery was first mechanically operated, becoming more and more computerized in the decades that followed. But these machineries were prone to error, heavy in maintenance requirements – and could cause injury to workers.

With the advent of the Internet of Things (IoT), big data, and machine-to-machine communication (M2M), we’re now seeing yet another industrial revolution take place. We are witnessing a merge of computer intelligence with automation in ways we’ve never seen before.

Industry 4.0 will transform current production into smart factory production, altering business processes and reshaping the role of people in this realm, as smart machines take to sharing and complementing the roles of humans in production.

Industry 4.0 is the fulfillment of digitization as envisioned by industries across the board. We can sum up the definition of Industry 4.0 as the amalgamation of technology and business strategy. It is the key to unlocking any enterprise’s maximum manufacturing potential.

Its goals are straightforward:

In many respects, Industry 4.0 is an evolution of the previous industrial revolution. It optimizes the potential of computer automation by integrating the following:

The Internet of Things

The success of data exchange and autonomous automation (two of the primary characteristics of Industry 4.0) depends on the machines’ ability to communicate and their real-time responses with one another.

Data is crucial to Industry 4.0. Thanks to Iot, data will come from many different sources, and manufacturers will need them to make sound, real-time decisions.

These three are instrumental in the creation of a smart factory. They’re not the sum of it, but they pave the way for machinery and robotics to connect with people and processes. Combined, all of these make up a cyber-physical system where digital and mechanical components merge in an industrial environment. This is the force behind Industry 4.0, the transformation of theory into practical applications.

Robots factor into discussions on Industry 4.0 because they execute its vision. Enterprises that aim to have a smart factory 4.0 must integrate robotics into its operations. More than the standard, computer-coded machines, however, they will need collaborative robots or “cobots” to achieve this goal.

Cobots are compatible and highly ideal for Industry 4.0. As the name suggests, these robots promote collaboration, not just between machines but with humans as well.

Industrial robots meet performance standards in their respective industries. But to fully realize Industry 4.0 manufacturing, enterprises need to transition to smart factory technology, with machines that can work seamlessly alongside humans, helping them work faster and produce higher quality output.

Human-robot collaboration is the next level of industrial and manufacturing automation. Together, they represent the future of work: smart factory technology. They enhance human capabilities in the workplace, helping people work faster and better, which is one of the main goals of Industry 4.0.

The following qualities also make cobots ideal for this new era of automation:

Cobots, especially the ones we produce at Techman Robot Inc., are safe to work with. They are force limiting, which means they immediately stop when they encounter an object to avoid inflicting harm on both humans and machines.

Unlike their non-collaborative counterparts that rigidly follow programming code, cobots have cognitive features that help prevent on-site accidents. Our TM Series payloads, for instance, have sensors and a built-in vision system that enhances captured images, recognizes objects, and reads barcodes. Also, thanks to machine learning, cobots can be taught to perform very specific tasks while maintaining speed and precision.

Cobots offer ease of programming that is unlike what we’ve previously encountered in the world of automation. Comprehensive knowledge of programming code is no longer required, cobots can be easily operated by non-IT personnel. In this case, specialists (e.g., welders, CNC operators, scientists), not cold coding, can be the ones to “teach” orprogram a cobot to perform tasks.

With cobot integration, automation systems progress from purely mechanical to expert-guided. The human involvement merges business intelligence with technology, which again is the core principle of Industry 4.0. Cobots, therefore, are a stepping stone towards smart factory automation.

With Industry 4.0 and cobots elevating automation, we can all look forward to an exciting future. The best part is that both can benefit all industries of all sizes, not just industrial and manufacturing giants. In fact, cobots are already in action in foodservice, education, agriculture, and research and development.

The ball is now in the court of companies in every industry.Is adopting the new wave of technology going to be happening soon? A broad perspective on the applications of collaborative robots and the willingness to implement Industry 4.0 principles, perhaps, can go a long way.

Techman Robot Inc.’s expertise and knowledge is an asset to any enterprise. Our innovations can be your building blocks towards creating a smart factory and finding success in your niche. Let us help you in shaping the future of work in your company. 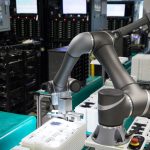 Connect and Create: The Advantages of Smart Factory AutomationBlog 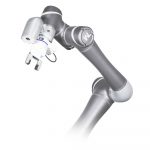 The Advantages of Cobots in the Manufacturing IndustryBlog