TM Component Editor provides developers the capability to compile nodes into components, which can be easily reused by other projects. It greatly simplifies the flow structure of repeating or similar applications. In addition, based on the diversity of product features, developers can plan the possible moving path of the robot in advance with TM Component Editor or design with the positioning of TM Landmark to create a variety of components applicable to screw driving, welding, polishing, and grinding.

A component can consist of a variety of features to make the flow structure simple as well as reusable in other projects. TM Component Editor provides developers with a complete mechanism to create components. Among the nodes, the Start node can configure the component’s basic parameters such as display icon, usage, global variables, and its instruments. Moreover, developers are able to provide users to modify the parameters on demand. To help users to understand the usage scenarios of the developer’s component quickly, TM Component Editor manages a naming rule.

Developers can click on the Start node for basic settings. In the basic settings, Provider is the name of the developer, Name, and Type stand for the name and the type of the node respectively, and Icon is the image to represent the component. In addition, TM Component Editor can pack available Global Variables and instruments together into the component, and show the results in the branches of the Gateway node.

IMPORTANT: Do not use reserved words such as var in naming. Step #2: The component is created successfully, fill the settings on the right Component Edit panel. Details are listed below. IMPORTANT: The component’s icon supports PNG image files only, and the suggested maximum resolution is 73 x 73 pixels to avoid distortion or blur.

This item sets the branches of the component. Developers have to select a Gateway node as the exit of the component and the possible results branch over the Gateway node exits according to the logic. Users can process the flow with the respective programs provided by the developers. 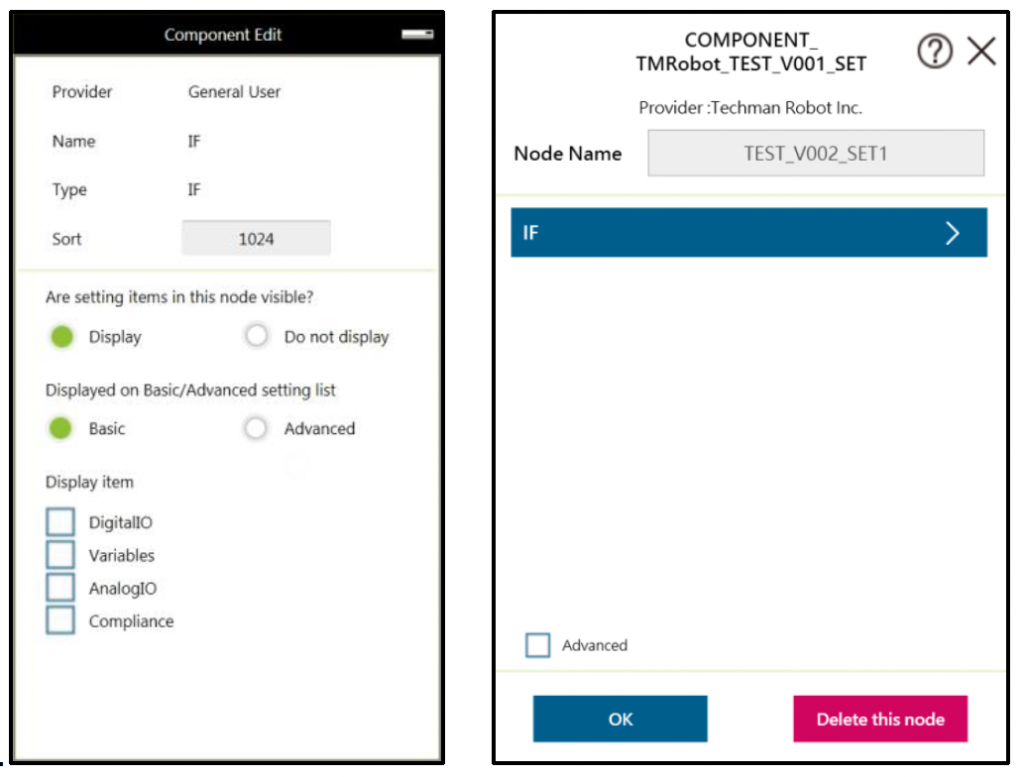 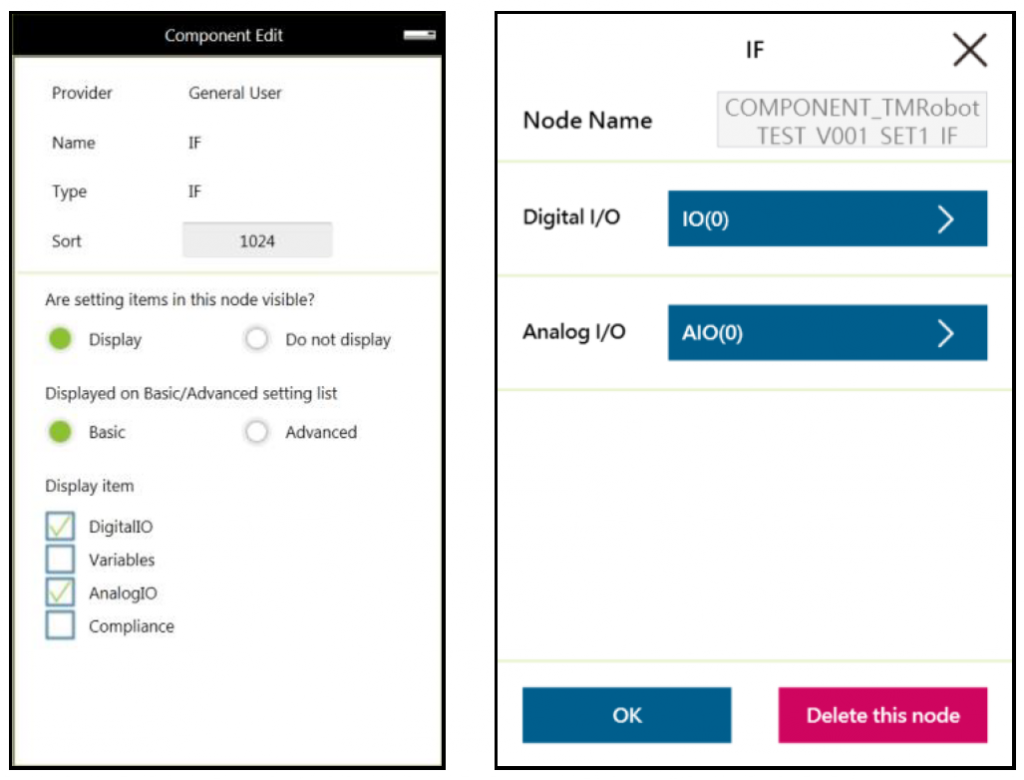 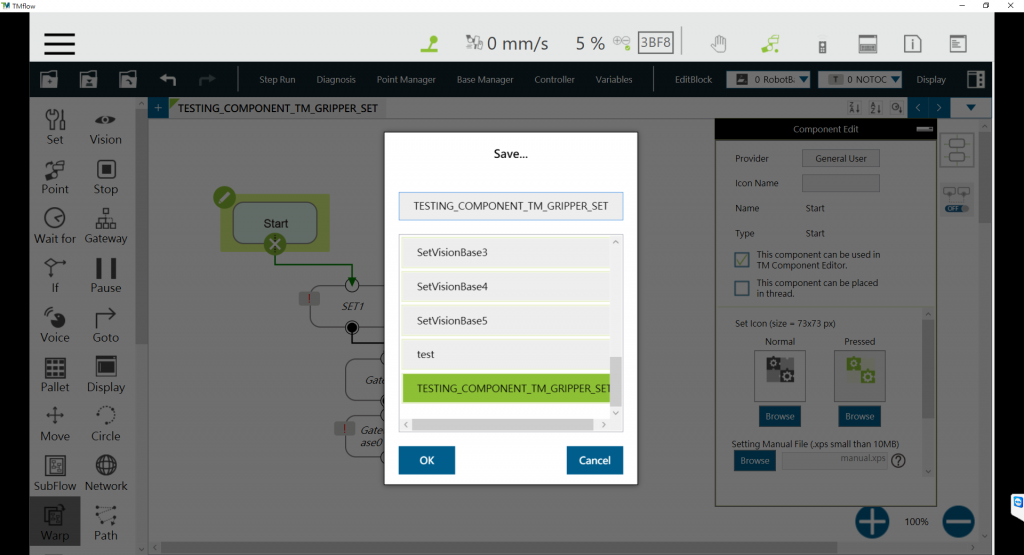 In TM Component Editor, you can edit the devices in advance, such as F/T Sensor devices, Modbus devices, Network devices, and embed the devices in the Component. The supported devices of TM Robot will be covered one by one below.

Users can have the parameters of communication and physics in the force-sensing devices embedded in the Component. By dragging the component in TMflow, users can merely configure the serial port address to match the actually connected address for making use of the Component established with the device in the flow. If DeviceReadOnly is checked, users of the component will be limited to use the developer set devices.

When selecting the Gateway node as the exit in TM Component Editor and clicking save, TMflow will create a component with the project. In the meantime, users can activate the created Component in the Component List by navigating to The Component should come out as a node on the left node panel. Below is an example of successful imported components. 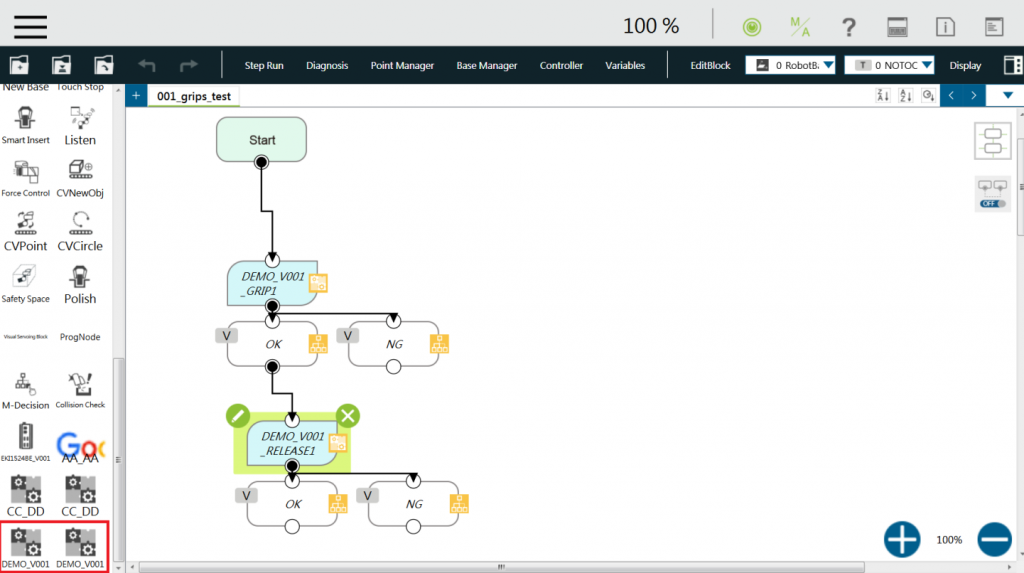