The Hannover Messe, the world’s largest industrial exhibition, will be held April 23-27. This year’s lead theme is “Integrated Industry – Connect & Collaborate”. Collaborative robots will lead the intelligent supply chain and emphasize the interoperability of Industry 4.0, which will revolutionize current business models. The world’s most intelligent robot, Techman Robot, is riding the crest of the automation wave sweeping the world. The new TM12 Series of high-payload robots will make its debut at the Hannover Messe in Germany.

The built-in vision of the Techman Robot makes it suitable for various industrial applications such as uploading and offloading materials. To satisfy the needs of more industries, Techman Robot will be launching a new high-load robot, the TM12 Series that offers greater payload capacities than any other robot with the same arm length currently on the market. With a payload of up to 12 kg, a working range of 1300 mm, and its M models matching high-performance mobile AGVs, this robot is the preferred choice for the semiconductor industry.

The Techman Robot features built-in vision recognition, using exclusive precision positioning and coordinated adjustment capabilities patented by TM Landmark. This robot arm has overcome positioning constraints and can freely move around to perform a wide variety of tasks. Even more astoundingly, it enables perfect matching with vision recognition systems to perform tasks requiring dual-machine or multi-machine arm coordination, which makes it flexibly applicable to different industrial processes. In addition, through the TM Plug and Play feature developed and certified by Techman, this robot can connect with grippers from major brands (such as SCHUNK) to perform precise assembly, move trays, and perform other customized motions. Dual-machine or even multi-machine collaboration significantly reduces the need for fixtures, offers great application freedom, and shortens production time. Techman Robot can work independently or together with multiple machines. These versatile robots save costs and raise efficiency, and they also open the gates toward an ever more versatile automation future.

The definition of collaborative robots is: Robots that are able to work together with humans on the production line to improve efficiency and all the while meeting safety norms. When you visit our booth at the exhibition, you may enter the hazard alert area that we have set up. An optical raster will automatically detect foreign objects, and the robot will slow down to a safe speed to keep users and visitors safe. Conversely, when the robot exceeds the set safety range, it will also slow down to protect the safety of its human colleagues.

TM Manager for an efficient and smart factory

We will offer on-site demonstrations of instant factory connectivity through the TM Manager system. This system can connect and monitor equipment signals and IT databases for communication, supervision, and control. It is also able to find incident patterns in historical data and use big data analysis to predict failures, raise production capacity, and reduce maintenance costs to build the efficient and smart factories of the future where robots and humans work side by side.

Taiwan’s leader in smart machinery
Techman Robot is Taiwan’s first and only company to launch new smart collaborative robots. From R&D to production and marketing, the Techman Robot brand covers it all in-house. Within the short time frame since its launch, Techman has won domestic and international awards such as Taiwan Excellence, and the iF product design award and also the Reddot design award from Germany. At this year’s Hannover Messe, Techman Robot will represent Taiwan’s smart machinery at the Taiwanese Pavillion. At a press conference, Techman Robot COO Scott Huang will demonstrate how the programming for visual recognition and pick-and-place for this robot takes less than three minutes (which typically takes 1-3 weeks). Mr. Huang says: “The Techman Robot is smart, simple, and safe. It has built-in vision which reduces the cost of fixtures and reduces delay time, it can also self-coordinate and adjust its positioning. It is ready for the “high variety”, “high velocity” requirements of Industry 4.0 and will revolutionize the versatile automation of a wide range of industries. 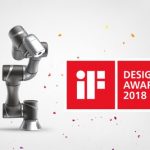