Taoyuan, Taiwan—April 1st, 2019—TM Robot, a leading brand of collaborative robots in the world, has once again made its showcase at the 2019 Hannover Messe. TM Robot announces TM Operator series and launches the TM Palletizing Operator that can be integrated with its own robotic arm, TM12. It helps users to quickly setup the process and automatically correct objects and pallet position offset via visual inspection with using own Smart UI. TM Robot also cooperated with AutomAPPPS during the product development a force control function that automatically generates processing paths according to the pre-defined force settings. To greatly meet industrial diverse applications, TM Robot will offer the best solutions of future factories and aid people’s life with human-friendly robots.

TM Palletizing Operator makes its debut at Hannover Messe
TM Palletizing Operator makes its public debut today integrated with TM12 robotic arm, which has a strong payload of up to 12kg and a working range of 1300mm. It is suitable for the processing industry because it uses visual inspection to automatically correct objects and pallet position offset. Users can deploy efficiently offline pallet pattern editor which has an easy-to-use interface. Besides, TM Palletizing Operator combines the telescope pillar and it can automatically adjust its height according to the current pallet position. High flexibility features satisfy industries such as manufacturing, food processing, logistics and warehouse management, which corresponds to the trend of Industry 4.0.

Technology breakthrough for Adjusting Force Control
It is difficult for traditional robotic arms to generate machining paths (curve or surface) for deburring and polishing. The cooperation between TM Robot and AutomAPPPS helps you to automatically generate machining paths that can be directly imported into TM Robot. This not only saves time but also eliminates the complexity of manual teaching points in the past. It is demonstrated on TM5 and perfectly achieves processing applications such as deburring and polishing by pre-defined force control setting and a six-axis force sensor. This solution greatly increases the robotic arm’s efficiency in your operation line definitely.

Manage & Analyze Data Intelligently with TMmanager
TMmanager is an intelligent data management and analysis that combines SFC, SCADA, MES systems. It easily integrates third-party hardware such as robotic arms and factory production equipment for highly-efficient integration of resources reduces work hours and manpower. TMmanager also has a function for analyzing large amounts of data and an early warning mechanism to effectively avoid failures, increase production capacity and reduce maintenance costs. It can be combined with ERP and shipment management systems to instantly analyze the factory’s intelligent data to create a highly-efficient smart factory composed of man and machine.

Expanding across European business leading the trend of collaboration
TM Robot has quickly become the one of largest industrial collaborative robot brand since its establishment. With the rapid development of Industry 4.0, Techman Robot has successfully penetrated into Europe and Middle East markets such as United Kingdom, Germany, Netherlands, Denmark, Spain, Italy, Czechia, Romania, Turkey and Israel. The target for this year is to further expand in the European continent. With the increasing trust and demand from customers, it aims to widen industrial coverage such as medical, logistics and automotive industries, and also integrate industrial applications to create smart factory solutions for human-machine collaboration.

Copyright © 2019 TECHMAN ROBOT INC. All rights reserved. We recommend that you use the latest version of Chrome for the best viewing experience.
Visit Techman Robot at Automate 2019Announcement 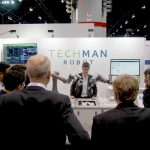