The South Korean government has decided to expand the production scale in the domestic robot industry to 6.7 trillion won (US$6.15 billion) by 2022 and increase the number of small and mid-size robot producers with sales of more than 50 billion won (US$45.93 million) to 25.

To this end, industry, academic and research institutions will join hands to implement a strategy to advance the robot industry. They have aggressively promoted the market of collaborative robots that are frequently used in manufacturing and established a medium and long-term development strategy to secure the competitiveness in key components for robots. In addition, telecom companies, robot manufacturers and research institutions will jointly form a committee for artificial intelligence (AI)-robot application and industrialization to develop the AI platform for robots.

The Ministry of Trade, Industry and Energy announced “Intelligent Robot Industry Development Strategy” on Feb. 7. A collaborative robot is a robot that assists humans with everyday activities and work around humans, not a robot that replaces human labor. The world’s top manufacturing nations, such as the United States and Japan, are considering robots an important factor to maintain their competitiveness and expanding their investment in the sector. The U.S. invested US$225 million (244.3 billion won) in mainly collaborative robots in 2016 in line with the “National Robotics Initiative,” while Japan made a 29.41 yen (US$268.89 million or 292.6 billion won) investment in 2016 to pursue its “New Robot Strategy.”

However, the domestic robot industry has the industrial structure based on manufacturing robots for the large process industry. Accordingly, some market experts say that South Korea needs to strengthen the robot industrial foundation by vitalizing the market of mainly collaborative robots and promising service robots, focusing on the supply of key parts and proactively improving related systems.

Techman Robot will endeavor to explore the collaborative market in Korea and the latest robot applications will be showcased at Robot World exhibition which will be held from 10-13, October 2018. Welcome to join us at Southern Manufacturing 2018Corporate Event 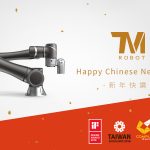