What are Collaborative Robot Applications?

When you think of a robot in a manufacturing plant, you may visualize collaborative robot applications, such as a sizeable mechanical arm assembling car parts or a device that fills hundreds of food packages every few minutes. These are called industrial robots, which are fully automated to do specialized tasks like pumping, packing, labeling, and more.

But they’re often isolated, working on their own or with their fellow robots. This is because they operate at a fast rate, which may harm humans that come near them. Sometimes they’re seen as a threat to human jobs, taking over manual work that people used to do. Robot Vision System: What You Need to KnowBlog 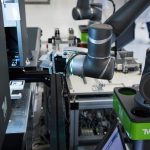 A Look at the Current Challenges of Robot VisionBlog